Glasstire
Open a larger version of the following image in a popup:
Share

Absence maintains a presence in will you meet me by the river’s edge, on view at Austin’s Co-Lab Projects, as artist Yeni Mao explores the power of suggestion through, what he calls, the agency of materials. “There is this dialogue between what we put into a material and what that material brings with it,” he tells me over Zoom from his home in Mexico City. “I want the material to come to the forefront and not try to hide it with a bunch of aesthetics.”

Mao, who attended the Art Institute of Chicago and later apprenticed at a foundry in California, is perfectly at ease with a sculptural practice marked by architectural impulses. His site-specific installation at Co-Lab brings together an affinity for steel, ceramics, and leather, with a refined sense of melding materiality into a multivalent metaphor — in this case, the symbolic, dualistic nature of the serpent.

“Not only does it represent danger and evil, but knowledge and safety,” he explains. “The same things that are evil inside of you are the same things that save you.” Snakes play a somewhat mythic role in Mao’s own ancestry. His mother still vividly recalls being a young girl in British Borneo during World War II, and having her father (Mao’s grandfather) save her from being bitten on several harrowing occasions. Those memories — of the Japanese occupation and of the island’s venomous snakes — are forever stored in her cells. 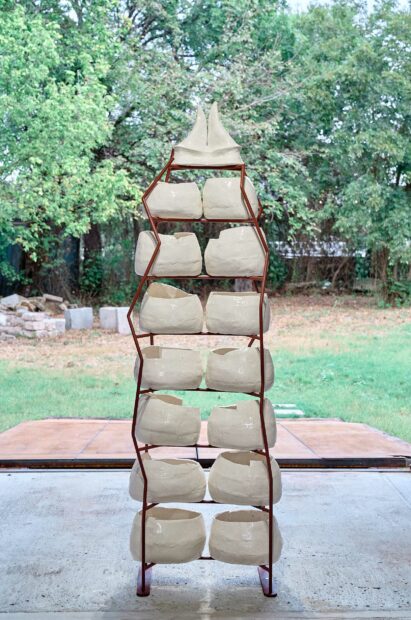 Installation view of Yeni Mao: will you meet me by the river’s edge at Co-Lab Projects. Work: fig 31.1 rattle, 2021, Ceramic, painted steel. Photo by Ryan Davis, courtesy of Co-Lab Projects

Perhaps unsurprisingly, serpents are now part of a linear investigation in Mao’s practice. When Co-Lab invited him to Texas as an artist in residence, the region’s rattlesnake immediately came to mind: Mao’s installation features four sculptural works inspired by the animistic symbol. On one end of the gallery, a vertebral tower of white ceramic vessels, stacked on an open steel armature, tapers up to a sharp tip. (A small ceramic serpent juts out from an adjacent wall to keep an eye on things.) 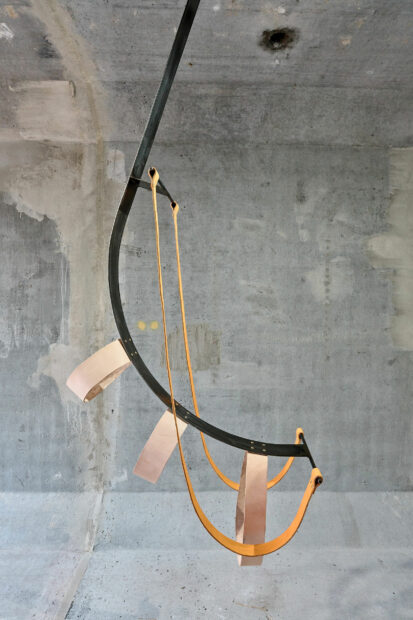 On the other end of the gallery, a cylindrical swing stretches toward a single stirrup. The swing, with its large leather loops and curved steel spine, connotes kink, but it’s the lone stirrup that sounds the alarm. “The original conception was this idea of a rattlesnake’s tail going into the earth in a super sci-fi, old movie kind of way,” says Mao. “A snake goddess in this King Kong scenario where your body is tied into the sling and your legs are open for that snake.” Mao’s sculptures, more gestural than functional, invite the viewer to fill in those blanks. 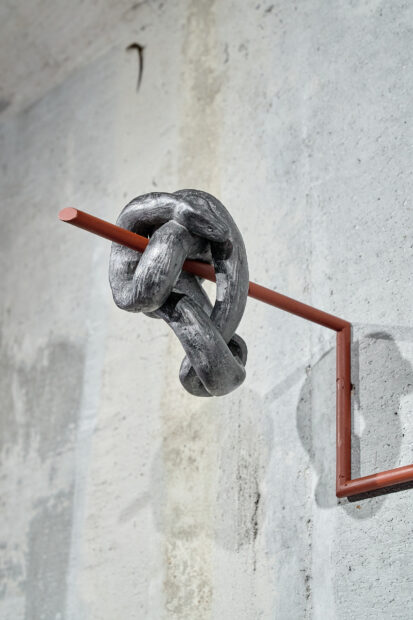 Installation view of Yeni Mao: will you meet me by the river’s edge at Co-Lab Projects. Work: fig 26.2 kaaito, 2021, Ceramic, graphite, steel. Photo by Ryan Davis, courtesy of Co-Lab Projects

Except for the small ceramic snake, brought from his studio in Mexico, each piece for the exhibition was fabricated in Austin. (Other than the leather, the materials were locally obtained as well.) The final product comes off as both cerebral and somatic: unspecified entry points that are strictly open to interpretation.

Co-Lab’s gallery space itself mirrors Mao’s medieval-meets-modernist, post-minimalist motif: constructed out of five concrete culverts and stitched together to form a sort of shipping container, the space opens up on either end with steel-framed wooden doors that dramatically lower like a drawbridge. Natural light nourishes the narrow interior and annunciates its asscher-cut openings, which happen to frame Mao’s two main sculptures with pristine grace. 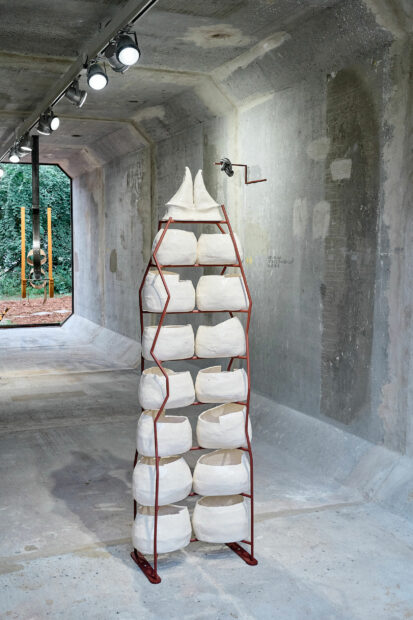 “I definitely wanted to do the project specifically because of the culvert gallery,” he expresses. “If it was just another white box maybe I would have felt differently.” Mao spent a total of three weeks in Austin; an experience, he says, that truly lived up to Co-Lab’s name. Cofounders Sean Gaulager and Leslie Moody Castro worked with him throughout the whole process, from exploring the project’s abstract underpinnings to custom building each piece.

I asked Mao if he dreamed up the show’s title while lazing in the river at Gaulager’s nearby ranch (where he stayed during his residency), and he refers me to Moody Castro’s poetic prose, which accompanies the exhibition. (“Meet me on the edge, on this edge of river and earth and skin,” it begins.) “Leslie was born on the border and I have this transnational identity, so we naturally think about that a lot — political borders through an emotional border and an elemental border.”

Mao, who was born to Chinese parents in Canada and grew up in Michigan, landed in New York City for some 20 years, where he worked in craft fabrication (think specialized metal fabrication for restaurants). Eventually he threw himself full-time into art, packed up his life, and moved to Mexico City, where things took off in a new direction. Mao says there’s a rawness in Mexico’s aggregate culture, which he encounters on a daily basis — within the architecture, the food, and the history of things — something he never quite found in New York.

“The market in New York augments the problems of tribalism and racism,” he says. “Being gay and Chinese, I’ve always had to deal with that in my personal life, but bringing myself outside of that, I could see myself in a different way. I realized that in New York, I was approaching the issues I wanted to deal with from the outside in and not the inside out.” 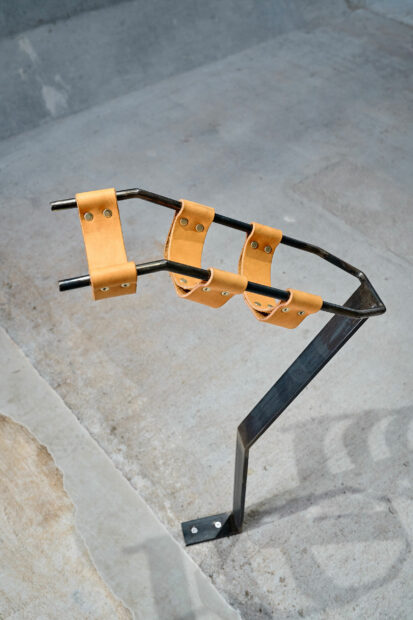 Living outside the U.S. these past few years has allowed him to approach his work in a more personal, poetic way. At 50, Mao feels he’s found a sort of inner strength in understanding that whatever he has to say — and whatever his personal stories are — that’s the way to approach his subjects. “It’s no longer through some exterior dogmatic BS, it’s really about telling the story of how my mom was scared of snakes.”

And so, will you meet me by the river’s edge brings us to the inbetween of things. What Moody Castro calls, “this place where body of water meets body of land and bodies collide and grow and collide again.” Similar to the serpent’s energy of light and dark, says Mao: “A duality that fights against each other, but also completes our experience.”

Will you meet me by the river’s edge runs through December 11, 2021. Co-Lab Projects is open Saturdays from 12-6 PM, and by appointment. There will be a closing BYOB bonfire on Saturday, December 11th from 6-10 PM.